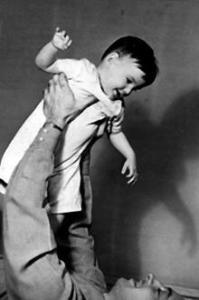 Pictured – Greg Bellow as a toddler in his father’s arms

Greg Bellow first heard of his father, Saul Bellow’s, death on the car radio. The media were informed before the family. At Saul Bellow’s funeral, the eulogies were given by luminaries such as author Martin Amis, Bellow’s literary “son”, but none of his own three sons were asked to contribute. Over the ensuing weeks, tributes flowed incessantly from writers, such as Philip Roth, who had been mentored by Bellow and by his many friends. So orchestrated were these testaments of public grief, that Greg Bellow wondered: “What is it with all these filial narratives? After all, he was my father! Did they all have such lousy fathers that they needed to co-opt mine?”

Greg Bellow’s memoir, Saul Bellow’s Heart is a poignant cri de coeur of what it was like growing up in the shadow of that huge literary presence, and monumental ego. It’s a commonplace that just because you may be a great writer, you are not necessarily a great human being. Greg Bellow’s warts-and-all account of his father is refreshingly honest. Life was not easy with a man who was affectionate and easy to love but who expected much and often gave little in return. Greg Bellow recounts the many hours he spent as a child waiting for his father to finish writing in his locked study after being promised an outing that never eventuated. Saul’s Bellow’s gravestone simply states he was a “Writer”, not that he was also a “father”. Reading between the lines, it’s clear Greg Bellow ruefully understands where Saul’s priorities lay.

For a long time, Greg Bellow tried to separate his father’s public and private personae. This was partly out of respect for Saul’s privacy but also his own peace of mind. The older son of Saul Bellow’s first marriage, Greg’s early years were spent out of the spotlight, as his father struggled to write. But after the publication of The Adventures of Augie March in 1953, Saul Bellow’s star rose. By the time Herzog was published in 1964, he was not only world-famous but hailed by Time magazine as an icon of American literature. As Martin Amis wrote in The Atlantic Monthly: “The Adventures of Augie March is the Great American Novel. Search no further.” Bellow’s Nobel Prize win in 1976 cemented his greatness.

For Greg, Saul’s rise to international prominence saw him change from the “young Saul” – warm, left-leaning, bohemian, tolerant – to “old Saul” – grumpy, conservative, arrogant and reactionary. It was the time of anger and recrimination. Greg, who had absorbed tolerance and liberalism in his childhood from both parents, could not accept “old Saul’s” right-wing views and the two were estranged for a time. Greg was also furious that Saul did not attend the marriage of his own granddaughter, Greg’s daughter Juliet. It was only later that he realised Saul was trying to cover up the muddle-headness that was besetting him in old age and did not wish to make a public appearance. Though reconciled at the end, their relationship was frequently a bumpy one.

This is also a memoir of justification – Greg is very keen to point out his own financial independence (he was a successful psychotherapist for over 40 years).  This is particularly relevant in view of his complex family history: Saul Bellow married five times. There were sons from the first three marriages, and a daughter with his last wife, Janis, forty years his junior. Janis became the executor of Saul’s estate after his death in 2005 and unpleasant family feuds and legal battles ensued amongst the siblings. Greg makes it clear he wanted no part in this and that he loved his father for himself alone. Part of the rationale for writing this book was to put forward his own personal view of a brilliant and difficult man.

There are many anecdotes in this memoir that shed light on Bellow’s personality: crying in the car after yet another row with his own father; the spirited, extended family dinners with everyone speaking Yiddish and talking at once; even the amusing snapshot of Saul’s sister falling asleep during the Nobel Prize ceremony, so interminably long were the speeches. Yet Greg Bellow never reconciles himself to the fact that as a public figure, his father was shared by many others, and this memoir quivers frequently on the verge of resentment.

This, then, is his final judgement of his father: “He was a man who lived for a singular creative purpose; a man who struggled with his deepest emotions; an author touched with literary genius; an authority with wisdom to impart; a father recently passed away; a father largely absent but emotionally present; and a man, father, and husband who promised more than he could deliver. And I was his little boy: a boy who felt deeply cared about; a grown son deeply influenced by the kind of love he received; and a man wrestling with the challenges of relating to a difficult father who walked away from shared family ideals.”