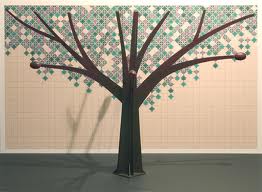 Trees in the Pavement by Jennifer Anne Grosser      Christian Focus Publications, via Amazon $7.99 (US)

I was delighted when fellow blogger Jennifer Anne Grosser asked me to review her book, Trees in the Pavement. However, when I began reading, I was concerned as to whether I was the right person to write about it. The book – which is aimed at children and young adults – is published by Christian Focus Publications, an organisation which is obviously keen to promote the Christian message throughout the world.  Jenn is the daughter of pastor/missionaries and has herself worked with refugees. Although she has no religious axe to grind, it’s clear her  themes revolve around finding meaning through physical, spiritual or philosophical displacement.

Now, my religious views are my business and we are all entitled to our own beliefs; so I decided that I would only review Trees in the Pavement if  the novel’s focus was neither overtly “preachy”, nor so couched in religious dogma that it would be inaccessible to a wide audience.

What I found was an insightful book that – if it preaches anything at all – endorses religious tolerance and inter-racial understanding. In fact, I think it should be on a general curriculum reading list for Secondary schools, so that they can discuss these very important topics.

Zari and her family flee to England from war-torn Kosovo in the 1990s. They are Muslims and find it hard at first to mix with their ethnically diverse neighbours. Zari – who is 4 or 5 when the novel begins – meets the Jamaican family next door, Pakistani  and British children at school and Jennifer Grosser pushes political correctness aside to talk about the conflicts that ensue between the races due to ignorance, stereotyping or misunderstanding.  Through Zari’s eyes, the reader sees the varied, cosmopolitan and multi-racial society of Britain today. When Zari’s elder sister Jasmina decides to become a Christian, huge gulfs open up within the family and threaten to split it apart.

Written in a deceptively simple style that mimics Zari’s childlike grasp of the world, Trees in the Pavement may be aimed at a young audience but it makes us all think about the nature of prejudice, acceptance and compromise. Yes, you could say that Grosser’s message is a Christian one of “love thy neighbour”.  But the take-home message is universal – whatever an individual’s beliefs, all races are part of an inter-dependent Brotherhood of Man.

Grosser is currently seeking representation for Favored One, a novel about a well-known woman in First century Israel.

Anyone interested in seeing Trees in the Pavement come out in digital format, can indicate their interest in the comments on the “That’s a Jenn Story” page on Jenn’s blog (http://thatsajennstory.wordpress.com/stories-for-sale/).

Dina is a writer, reviewer, journalist and broadcaster. It goes without saying that she loves books. Her blog, Books Now! can be viewed on www.dinaross.com.au and offers news, reviews and interviews with writers from around the corner to across the world.

11 thoughts on “Trees in the Pavement by Jennifer Anne Grosser”