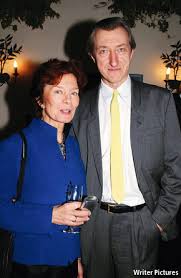 Levels of Life, by Julian Barnes

In a recent interview on BBC Radio, Barnes said he found reviewers’ comments that books were “deeply moving” and “beautifully written” the pinnacle of cliché. Better an in-depth analysis or some thought-provoking viewpoint, he added witheringly, than resorting to the trite. Of course he’s right and I confess to having employed those hackneyed phrases myself once or twice. And yet both would apply very fittingly to his new, slight (only 118 pages) but very deep book.

Levels of Life is an elegy to Barnes’ late wife, the literary agent Pat Kavanagh, who died in 2008. Hers was a fierce, sudden death from cancer. Not much more than one month passed between diagnosis and funeral. Barnes’ world was turned upside down. They had been married for 30 years and as a couple were a stalwart of the British literary landscape. As Barnes writes – two people come together and suddenly the world is changed.  But when “they” become “he” – how do you cope?

Barnes has always had a philosophical bent (he is after all the author of Flaubert’s Parrot and A History of the World in 10 ½ Chapters), so it’s not surprising that he approaches the topic of grief with characteristic lack of sentimentality and profound reflexion. The novella is divided into three parts: the first is a concise history of ballooning; the second the tale of a 19th century British adventurer and balloonist in love with the actress Sarah Bernhardt. The last section concentrates on Barnes’ own thoughts and feelings arising from his wife’s death. Air, land and six feet underground. Three levels of life and love.

The disparate elements of Levels of Life at first seem uneasy bedfellows. Is the symbolism of soaring into the air and crashing to the ground below too obvious and at the same time, too obtuse? And yet somehow, the book comes together perfectly. The last section, “The Loss of Depth” , is especially affecting (note, I did not say “moving”). Here is love and a meeting of minds so strong, so death-defying that it brings a lump to the throat.  Barnes isn’t afraid to show his pain, nor his anger. Not for him the Five Stages of Grieving ending in acceptance. He is especially scathing when describing well-meaning friends who use euphemisms like “passed” or “lost” to describe the finality and pitilessness of death.

Levels of Life, like all Barnes’ previous works, is dedicated to Pat Kavanagh. Her name is not mentioned once in the novella, yet she is a constant presence. And on the dust jacket, there she is, her intelligent gaze caught half smiling in a small black and white photograph. Reunited again with Barnes, whose snapshot sits just above hers.

Read it if you: Enjoy literary fiction and memoir. Keep the Kleenex handy.

Dina is a writer, reviewer, journalist and broadcaster. It goes without saying that she loves books. Her blog, Books Now! can be viewed on www.dinaross.com.au and offers news, reviews and interviews with writers from around the corner to across the world.

2 thoughts on “A Meditation on Love and Loss”